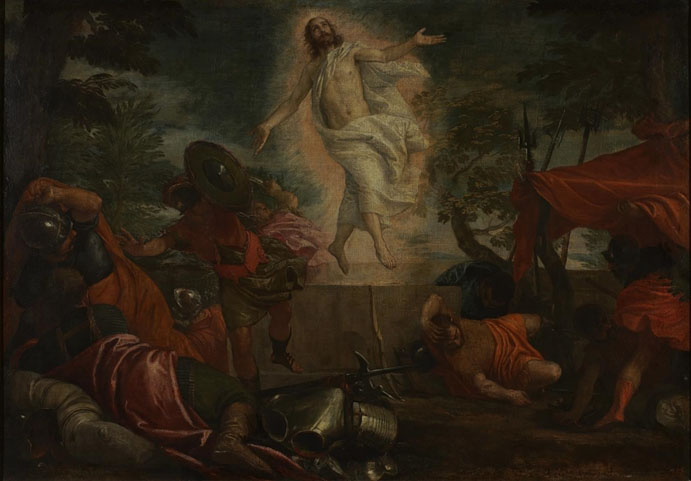 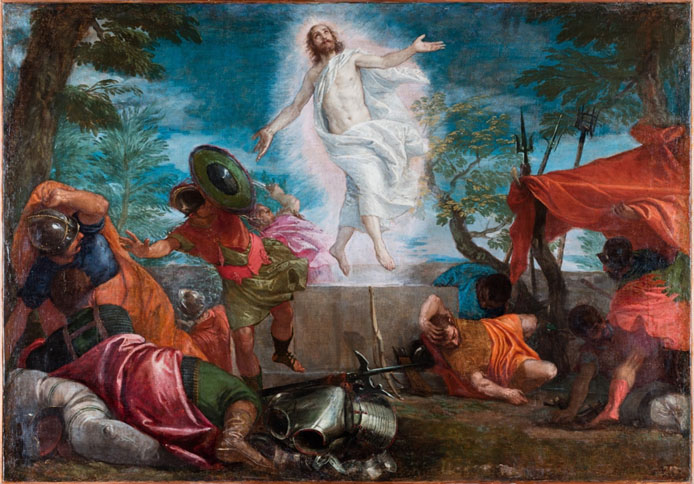 Resurrection comes from a remarkable collection of Sir Robert Walpole, the longest-serving British prime minister in history and an art patron of the first half of the 18th century. Many works from his collection, including this one, were sold to Catherine the Great.  For a while, the painting had adorned the rooms of empress Alexandra in Gatchina, from where it was moved to the Hermitage collection, and later, in 1928, to The Pushkin State Museum. Before that happened, Paolo Veronese was considered the sole author of the work. However, after studying the painting, the specialists decided that only some parts of it were painted by Veronese himself, and the rest was painted by his pupils.

What made them think that? At the moment of entering the museum’s collection, the way the painting looked was significantly different from its original appearance. Throughout its lifetime, it went through numerous renovations, and the 19th century views on conservation were vastly different from the contemporary approach.

Firstly, a thick layer of mastic varnish fully covering the painting disrupted its perception. This kind of varnish tends to darken over time, and there were several layers of it applied at different times on the surface of the painting. It changed the colours of the painting, making them much darker. The first time Resurrection came to the conservation workshop it was for this reason. In 2013, there was going to be an exhibition of the pieces from Sir Walpole’s collection in Houghton Hall in England. To prepare the painting for the exhibition, it had to be cleaned of the layers of the old varnish.

The treatments were started by Yury Kuznetsov, and then picked up and finished by Nadejda Koshkina. It was a long process that required meticulous work, so thick were the layers of varnish. After it was removed, the painting was completely transformed: the colours became much lighter and brighter.

Upon its return from England, the painting was returned to Nadejda Koshkina: after the layers of varnish were removed, there were numerous overpaintings found. To clean the painting of them became the conservator’s new task. The usual studies necessary for this type of work aided her in this mission.

Firstly, the painting was x-rayed. An X-ray examination helps to determine the state of preservation and the authorship: in x-ray images, original pigments and paints as well as the author’s hand are visible under the layers of overpaintings and varnish. IR-photography shows the underdrawing and how the composition had changed in the process of making of the painting. UV-photography shows the later interferences with the painting: inpaintings, overpaintings and retouches look darker in such images.

Thanks to the research data, the conservator was able to remove the overpaintings, under which she found a layer of conservation primer. This type of primer was easily removed with water, gradually exposing the original painting of Veronese.

After Nadejda Koshkina finished the conservation treatment, the painting came out in its true colours; art historians had no doubt that Resurrection belongs to Veronese.

The final proof of his authorship was a micro-X-ray spectral analysis of pigments. Microscopic samples of blue, green, yellow and orange pigments were taken from the surface of the painting to determine their chemical composition. As a result, lead white, ochre, auripigment, malachite and azurite were found. The last two confirmed the authorship of the artist.