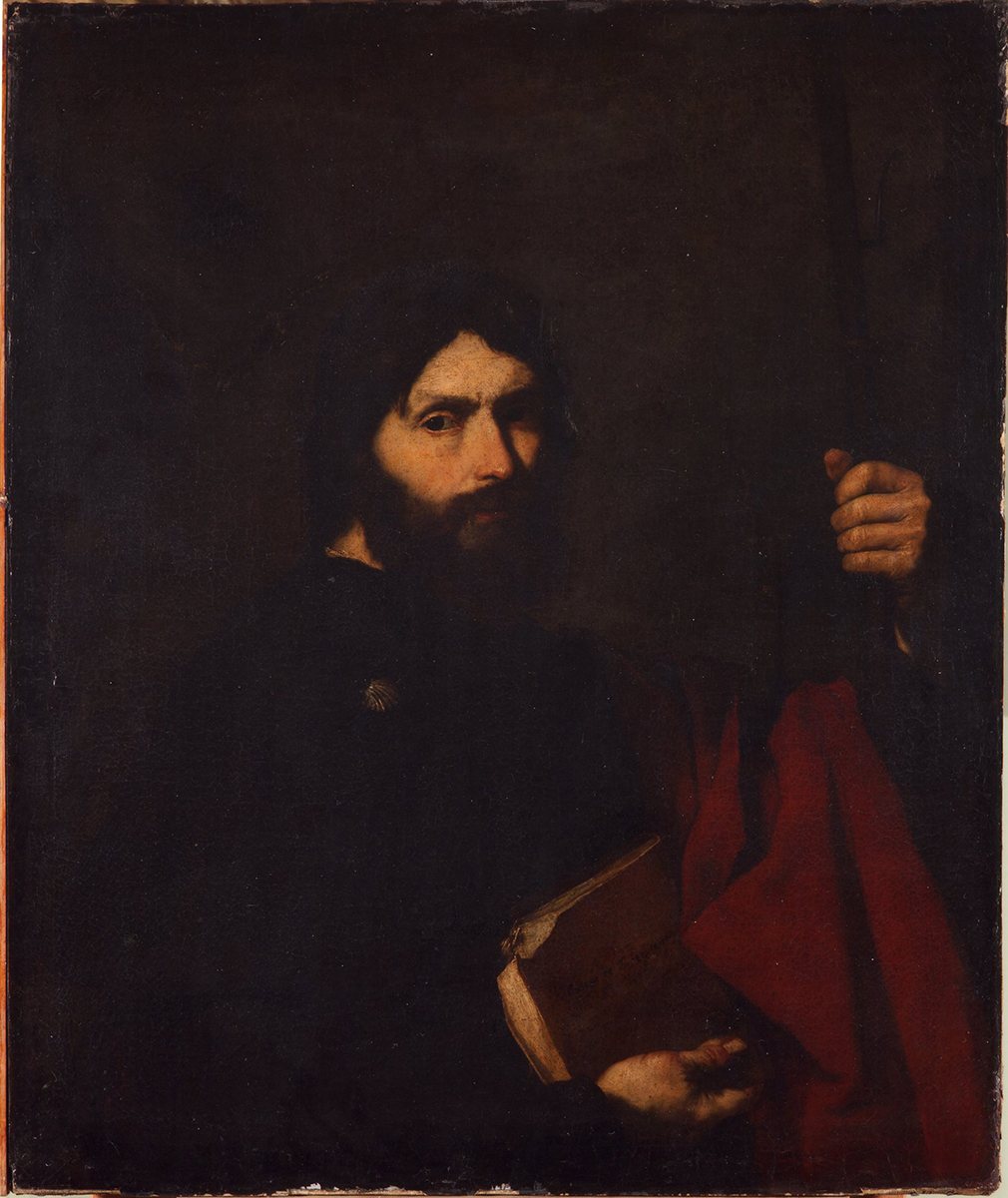 James the Elder was the son of Zebedee, a fisherman from Galilee, and a brother of John the Evangelist. Together with Peter and John he was present at the Transfiguration of Christ in the Garden of Gethsemane. It is believed that Jacob travelled a lot, and arrived in Spain where he preached Christianity.

James is considered the patron saint of Spain after the even allegedly happened during the Battle of Clavijo (844), where the Spaniards led by the king Ramiro I of Asturias (842-850) fought with the Saracens: the saint appeared at the battlefield on a white horse and turned the enemy to flight.

The Apostle was beheaded by Herod Agrippa in 42 AD. Later on the spot of finding of the saint's relics a chapel was built, to later become a place of pilgrimage called "Jacob's way."

There are three main types of St James' iconography:

1. As an Apostle: middle aged, holding a sword (his torture device) and a scroll (a symbol of the apostolic testimony of the incarnation of Christ)

2. As a pilgrim: can wear a broad pilgrim hat and a cloak, holding a staff, a flask with water and a travel bag. His special symbol is a sea shell (either on his chest, his hat or in his hands).

3. As a knight and a patron saint of Spain: depicted on a horse with a banner in his hands, his horse trampling Saracens.

On this particular painting he is depicted with a pilgrim staff in his left hand and a book in his right. His cloak is thrown over his arm, and there is a shell buckle on his chest. He's turned three quarters to the right, his eyes looking directly at the viewer.

The painting carries so-called traces of existence in the form of various damages and old conservations signs. Thus, even at the stage of pre-conservation examinations several problems were revealed.

Examination of the piece in UV and IR lights showed the retouched areas and an old C-shaped tear of the canvas around the head of James. The canvas was damaged and in need of relining. Lining is the process of gluing of the old canvas on a new fabric that takes up most weight and pressure of the construction, something that old canvas is unable to do. At the same time the painting doesn't lose any of its features such as texture of the base, paint layer, colours, etc. and can be exhibited.

A.Klenchev, and art conservator of easel paintings, has done the following: consolidation of the base and paint layers, removal of the old conservation varnish, as well as discoloured retouches and inpaintings, filing the losses, varnishing the surface and retouching some areas of the painting.

Four types of conservation fillings were found during the process of restoration:

Brick-red, imitating the colour of the original base layerDark grey, covering the C-shaped tearOcher-yellow, concentrated mainly along the top and bottom edgesLight grey ,that could be found on the whole surface of the painting

So many conservations performed at different times are rarely found and it says a lot about the rich life of the painting.

In the end, after getting new fillings varnish and retouches the colours became more contrasted and brighter, and its overall condition immensely better, it is now ready to be exhibited.

Samples of the base and paint layers as well as varnish were taken during the restoration process. Those samples were studied at the Grabar Art Conservation Centre which helped clarify the composition of the pigments, adhesives and the base fillings. Subsequently, this information will helped with dating the piece.