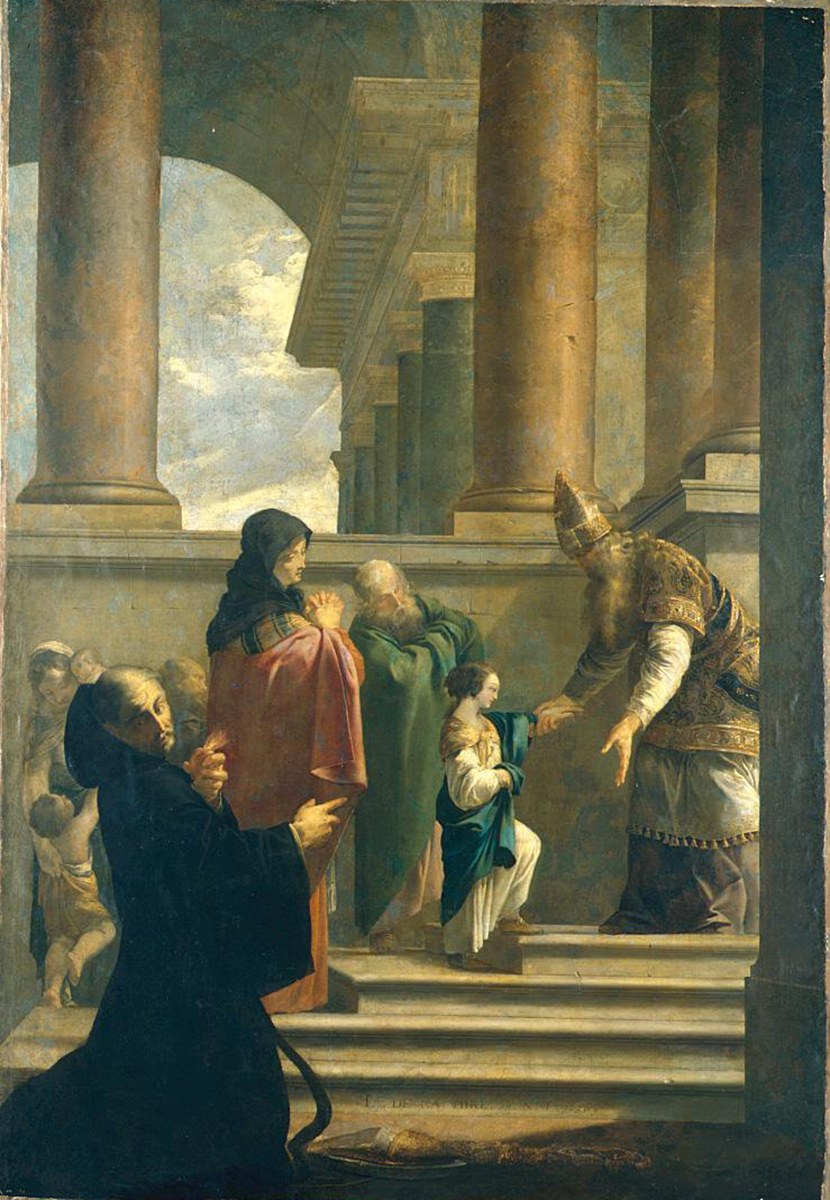 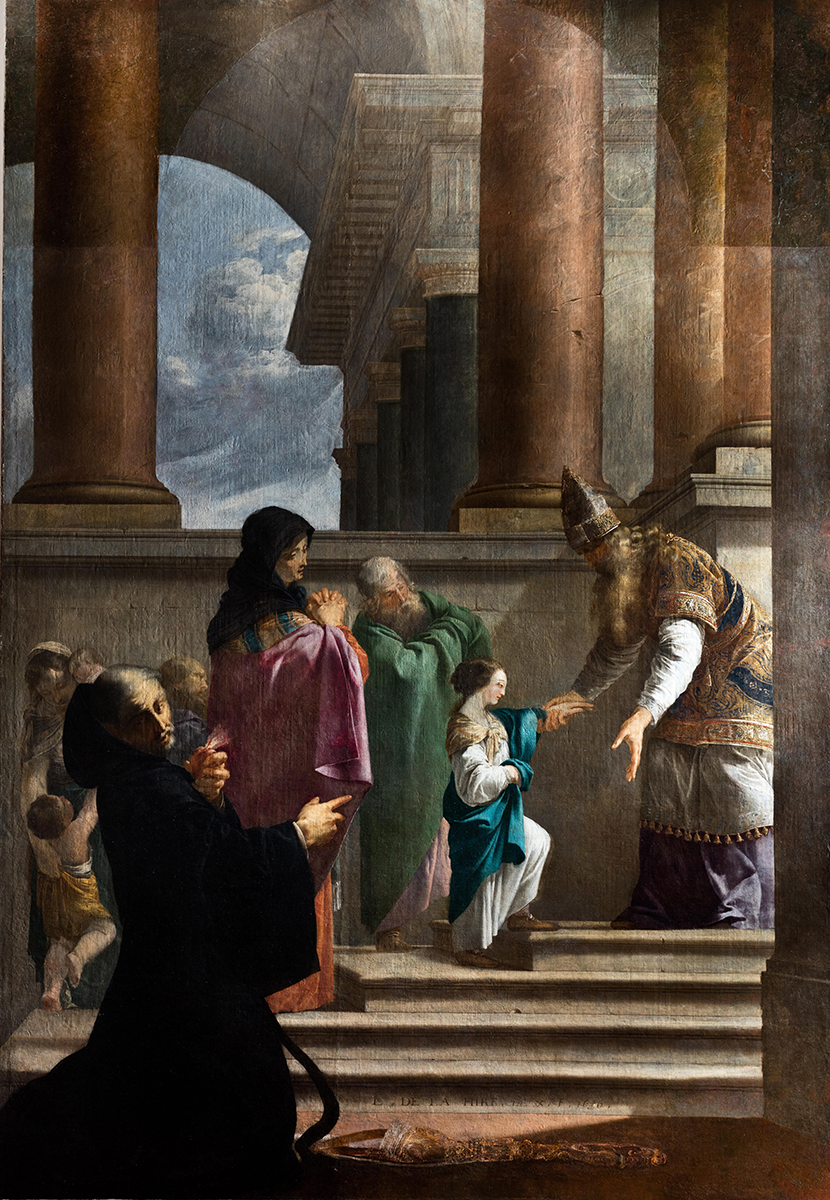 This painting by Laurent de La Hyre was acquired by the Rumyantsev Museum from the House of Yusupov’s Petrograd collection in 1925.

The Presentation of Mary by Laurent de La Hyre is a major, 292 x 199 cm, altar work. Initially, the top part was a semicircle; perhaps the painting was meant for some inner arch-shaped space. The stairs depicted at the bottom center are bearing the painter’s signature and the year the work was finished — 1639.

Prince Nikolai Yusupov is known to have bought the painting at an auction in Paris in the late 18th century. This is when we get the first record of its conservation: “In Paris, Yusupov handed over several works for conservation; ...La Hyre’s… paintings were backed, perhaps, it was a forced measure to have these paintings sent to Russia” (L.Yu. Savinskaya “Yusupovs’ Collection of Art”).

Next records of damage the painting sustained and the conservation it went through because of that appear following a blaze in the main building of the Arkhangelskoye Palace. The Register of Various Burnt & Outwardly Damaged Items, of the 28th Day of January, Year 1820 mentions this: “The Presentation of Mary by master LAHYRE is torn through.”

The third major conservation treatment we are aware of was done already in the Pushkin State Museum of Fine Arts in 1929-1933 by Pavel Korin and Vasiliy Yakovlev.

The last several decades saw the conservation resume: at the beginning of 2000 students of Moscow Academic Art Сollege, supervised by G.Yerkhova, consolidated several peeling areas on the painting.

In 2012, the painting was handed over to conservation as the lining started to separate from the canvas, due to which the ground layer bloated, and in places peeled off together with the paint.

Before the conservation treatments, the painting was studied. To determine the borders of the gaps between the canvas and the lining, we used side-light photography. Areas with extensive inpaintings and uneven varnish coating became visible when photographed in the UV-light. X-ray radiography showed numerous canvas losses and the damage of the base.

First of all, it was necessary to consolidate the base and, where required, the ground and paint layers. In the process of this work, it became clear that the dense coat of inpaintings and varnish over the original painting prevented glue from penetrating and consolidating the layers. Therefore, the conservation council decided to first remove the thick layer of varnish, inpaintings and retouches made at different times, and then begin to work with the base.

Small areas of the painting were treated with paint stripper to remove inpaintings and varnish, additional cleaning of separate fragments were made with a scalpel. Due to the condition of the painting and its large size this work took a year.  Sample cleaning showed that retouches lied mainly between varnish layers, so when thinning the varnish, the late inpaintings were partially removed. When they were removed, it opened up large fragments of the original painting in good condition. The size of the loss of the original painting was about 20% of the total area of the painting.

After the treatments were finished, the ground layer was consolidated. Then the painting was removed from the frame, lined and stretched on the working frame. The glue left from the previous lining was removed, the original canvas consolidated, deformations mended, and the losses of canvas were filled. The painting was lined and placed in a new frame.

The last step was to fill up numerous losses of paint. Before this, the conservation primer in places of losses was levelled. On the areas with the primer, where possible, the author’s brushstroke texture was imitated; on the areas near to the more delicate author’s painting the canvas thread pattern was imitated.

Filling of the losses was made by a thin sable brush No 1,5 with Italian restoration paints “Maimeri”, thinned with solvent forte per restauro (maimeri) + pinene.

Retouching of the numerous losses was made in parts, starting from the lower left quarter. When one quarter was finished, it was photographed, and the work passed on to another quarter. On completion of the retouches, the painting was covered with a protective layer of varnish (dammar varnish with pinene).

A new wooden frame with insets copying the original altar arched form was made by the frames conservator.

As a result, it was possible to restore the original style of the author's painting: its airiness and lightness. The piece joined the exhibition of the 17th-century French paintings.