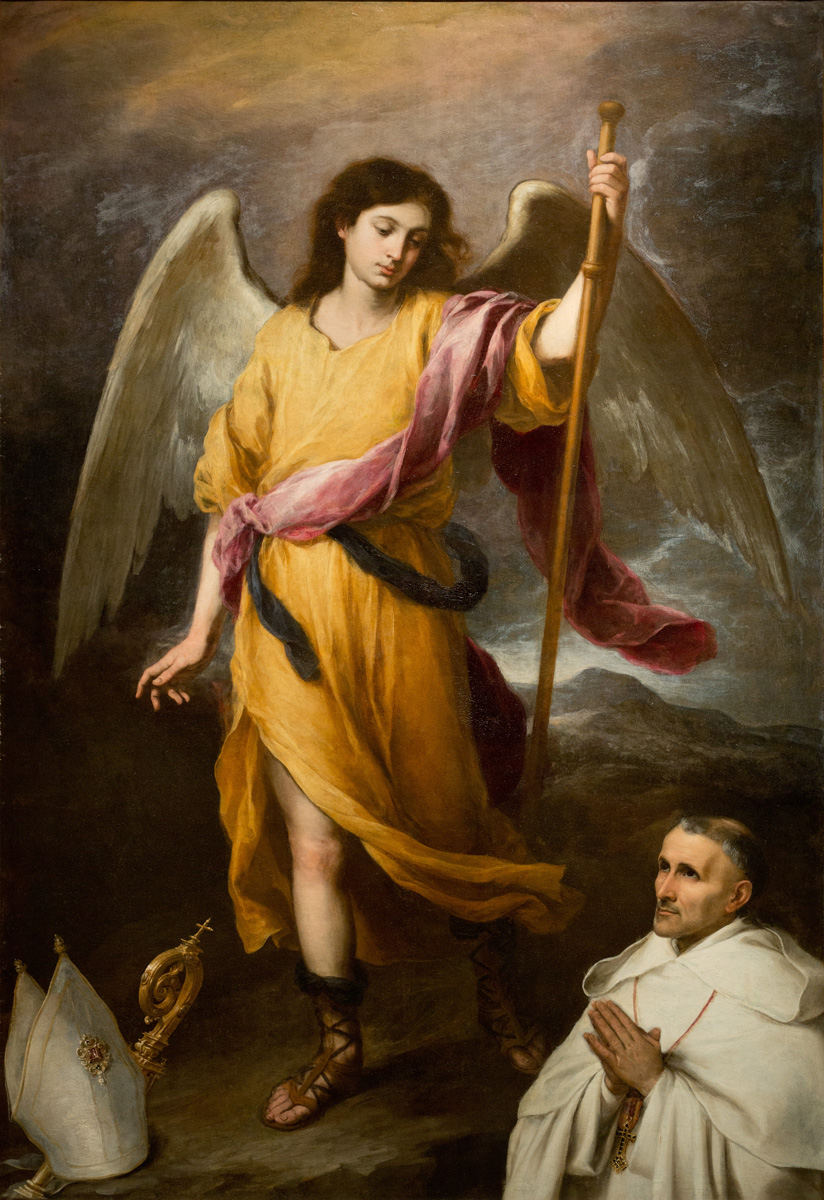 There are several paintings made by a remarkable Spanish artist of the XVII century Bartolomé Esteban Murillo displayed at the gallery of the Pushkin State Museum of Fine Arts. I had the honor of restoring two of his paintings: Archangel Raphael With Bishop Domonte and Joseph And The Christ Child.

Archangel Raphael with Bishop Domonte was painted in 1680 and commissioned by a canon of the Order of the Blessed Virgin Mary of Mercy monastery in Seville Fransisco Domonte upon his becoming a bishop. Evidently, the painting was kept at a cathedral, and it received its first damages from a lamp or a candle lit in its proximity. Significant damage of the paint layer was at the foot of the archangel, filled in with pieces of canvas during later conservation. After the inpaintings were removed, a small area where the paint layer was burnt was uncovered, which confirmed the earlier hypothesis.

The later fate of the painting included several long journeys across Europe. As proper ways of transportation for such pieces were yet to be established, it negatively affected its condition, especially if the journey took place during the Napoleonic invasion, when the fragility of the cargo was hardly taken into consideration. In 1810 Archangel Raphael, looted by Prince Eugene de Beauharnais as a war trophy, made its first trip from Spain to Munich. In 1824 it ended up in Saint Petersburg, and in the 1930s it was moved again, this time to Moscow. So, we are aware of at least three major moves this piece had to endure, and usually after each one it went through conservation, or, as they called it back in the day, "renovation". The term "renovation" suits the methods that were used before the science based conservation of the XX century was invented, with its responsible approach to the original painting, examinations and photo documentation.

The XIX century restorers wished to make the painting look new and bright, and didn't see anything reprehensible in painting over faded and aged original paint and then covering these 'renovated' areas with toned varnish that smoothed out the difference between the original paints and the ones used for the latter restoration (toned varnish has a little bit of brown pigment in it, that gives it a slight golden finish). And really, in the next two or three decades the painting looked fresh and the paints were glowing through the varnish. Every time the layer of varnish faded, it would just be covered with another layer, thus making the painting look fresh again. But at some point old varnish started to get darker and nothing could help it.

In the last two hundred years the retouched made at different times have drastically changed: the whites of the bishop's hat and the clothing have become noticeably lighter; the dark retouched became darker than the original colours. Thick layer of unevenly applied brown varnish have changed the colours of the painting.

In 2002 the painting was given to the Department of Conservation. The Pushkin State conservation council made the decision to make the varnish layer thinner. In the process it became obvious that old inpaintings were masking large areas of original paints. It was decided to first thin out the layer of varnish and then to remove the inpaintings. Given that there were many layers of varnish, and inpaintings were made more than once in different periods of time, as the varnish became thinner some inpaintings in between of varnish layers gradually disappeared. The main work on removing the inpaintings, however, was done after the varnish issue was dealt with.

Old inpaintings removal is a very complicated process that can differ from painting to painting. Different solvents and methods of their application are used depending on the size and thickness of inpaintings, and whether or not the fillings were made. Sometimes solvent compresses are used to soften the inpainting layer, but in case of this Murillo painting solvent was applied on smaller fragments of inpainting with a small brush for 1-2 minutes and then the softened layer of oil paints was removed with a scalpel. Sometimes the solvent was applied for longer periods of time. In the process of cleaning the old fillings covering the areas of intact original paint were found under the inpaintings. The filling was removed from the intact areas, but left at the areas of paint loss. It's worth noting that at the areas with the bishop's hat and his white clothes the inpaintings were made without any fillings, so the decision was made to reduce the inpaintings to the size of paint losses, and to use an old stable layer of retouches as a base for the new ones.

After the thinning of the varnish, removing the inpaintings and partial removal of old filings it became obvious that the losses of the original paint layer are not at all as great as it was originally thought to be. We added filings at some areas and smoothed out the old ones, as well as made retouches at the areas of paint loss and faded original paint layer.

Several years after the restoration of Murillo's Archangel Raphael with Bishop Domonte was finished, we started working on a small painting of the same author made on a wooden panel, Joseph and the Christ child. The painting was moved to our museum in 1930 from Hermitage, where, most likely in XIX century the base was паркетирована and mild conservation works were performed: fillings and retouches were made at the areas with paint losses, unfortunately, covering some areas with original paint work. The painting was covered with a thick layer of yellowy-brown varnish. And just like in case of the first painting, the layer of varnish was thinned out and the inpaintings removed.

Working with these two paintings I admired particular characteristics of the artist's painting style. I was astonished by the lack of smoothness in his brush strokes, as if the artist stroked the canvas rather harshly and then lightly dragged the brush, making the brushstroke almost translucent in the end, and never getting back to that same spot again. Thus, at first a brushstroke is thick and textured, and in the end we can see the base layers right through it. And it is because these fluctuations of the brushstrokes thickness that we cannot see with a naked eye, Murillo's art looks full of light and airy.