Boy with a bear 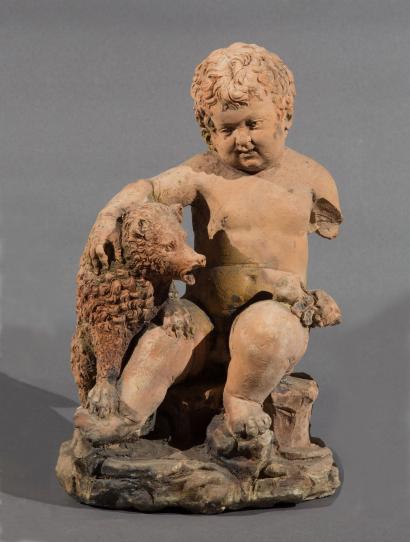 This touching terracotta figure of a boy with a bear came to the Berlin Museums from Florence in 1902. The fire in 1945 damaged it only slightly. The boy's missing left hand had been missing already when the figure came to the museum. In two catalogues from 1913 and 1933, Frida Shotmüller attributed the object to an unknown Italian sculptor of the 1480s, because of some similarities with the late works of Benedetto da Maiano (1442-1497). Now, the dating seems unduly early, it is more reasonable to date the group to 1520-30s, when most of the works of so-called "Master of the Unruly Children" were created (most probably an umbrella name for several different artists whose works had overlapping points with the works of Giovanni Francesco Rustici ( 1475-1554)).

The terracotta group with a boy and a bear has some similarities in style with a few copies of the well-known figure of St. John the Baptist the Child (Budapest, the Museum of Fine Arts; Florence, the Bardini Museum; London, the Victoria and Albert Museum), in which Jolan Balogh saw the heritage of Andrea del Verrocchio's workshop and also some similarities with Della Robbia's workshop's "The Child Jesus and the Child St. John" (Florence, the Bargello Museum; London, the Scharf collection).