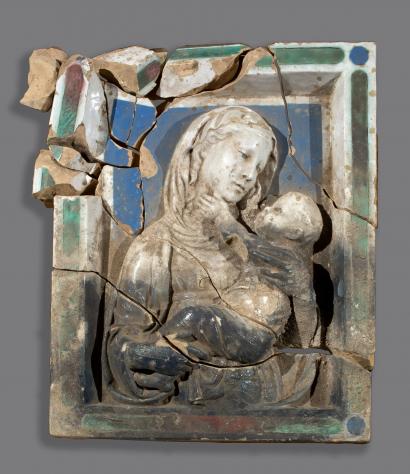 This touching glazed terracotta of Madonna and Child was presented as a gift to the Berlin museums in 1888 by count August Dönhoff-Friedrichstein, who purchased it in Florence from the famous antique dealer Stefano Bardini. Half-figures of Mary with Child were typical for the workshop of Della Robbia, and can be brought into line with works from the Metropolitan Museum ("The Bliss Madonna ") and the Museum of Fine Arts in Boston (Shaw collection), similar in size and close in iconography, as well as with the reliefs in the chapels of Collegiata at Impruneta near Florence. The type of "Friedrichstein Madonna", along with the characteristic pattern of the frame, imitating a stone mosaic, is most accurately reproduced in the version of the Albright-Knox Art Museum, Buffalo, USA (previously in the Capuchin church in Santa Fiora near Siena). The assumption of some researchers that the versions from Buffalo and Berlin were made with the same mould seems to be groundless since the differences in small details are quite large. John Pope-Hennessy dated them to 1435-1440, and Giancarlo Gentilini – to 1445-1450.