Bust of a Princess (fragments) 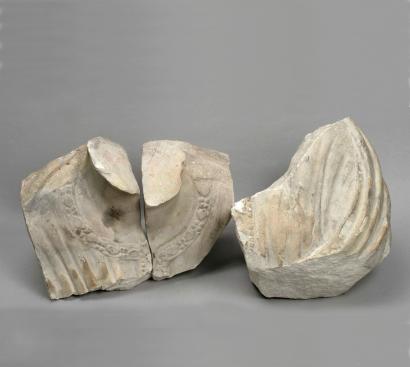 The three small stone fragments with a recognizable pattern decor on them – that's all that remained of the once famous bust of a young woman in a crown, that came from a small town of Scala, near Ravello, in Campania. Dated the end of the 13th century, similar to the bust of Sigilgaita Rufolo (Niccolo di Bartolomeo da Foggia, 1270-75, Ravello, the cathedral museum), its closest and the only analogy, it is a highly unusual work for the time. The very typology of the portrait bust, popular in ancient Rome, by this time virtually had ceased to exist.
The contemporary scientists (Rebecca Muller, Valentino Pace) who analyzed the preserved plaster moulds of the bust made an attempt to explain certain unique features of how this work was designed and to place it in a historical and cultural context.