Workshop of Andrea del Verrocchio, Portrait of the Wife of Matthias Corvinus 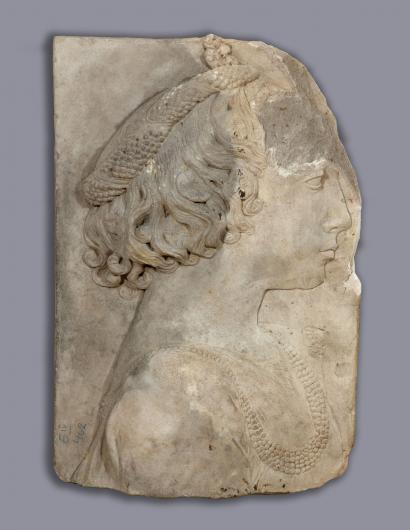 This damaged relief of a woman in profile is all that is left from a small pendant relief depicting King Matthias Corvinus of Hungary and his wife. The original work was purchased from Marques Orlandini in Florence in 1842 for the museums of Berlin. While there were no questions over the identity of the depicted man, the woman was thought to be either the king's first wife, Kunigunde, or the second — Beatrice of Aragon. The profile of the woman with characteristic hairstyle does resemble Beatrice as she was portrayed by Francesco Laurana (Frick Collection, US). Whether the profile belongs to Verrochio's school is being disputed now. There is a speculation placing it closer to Benedetto da Maiano's circle; the speculation is based on other similar pendant depictions of Matthias Corvinus and his wife stored at the Museum of Fine Arts in Budapest.