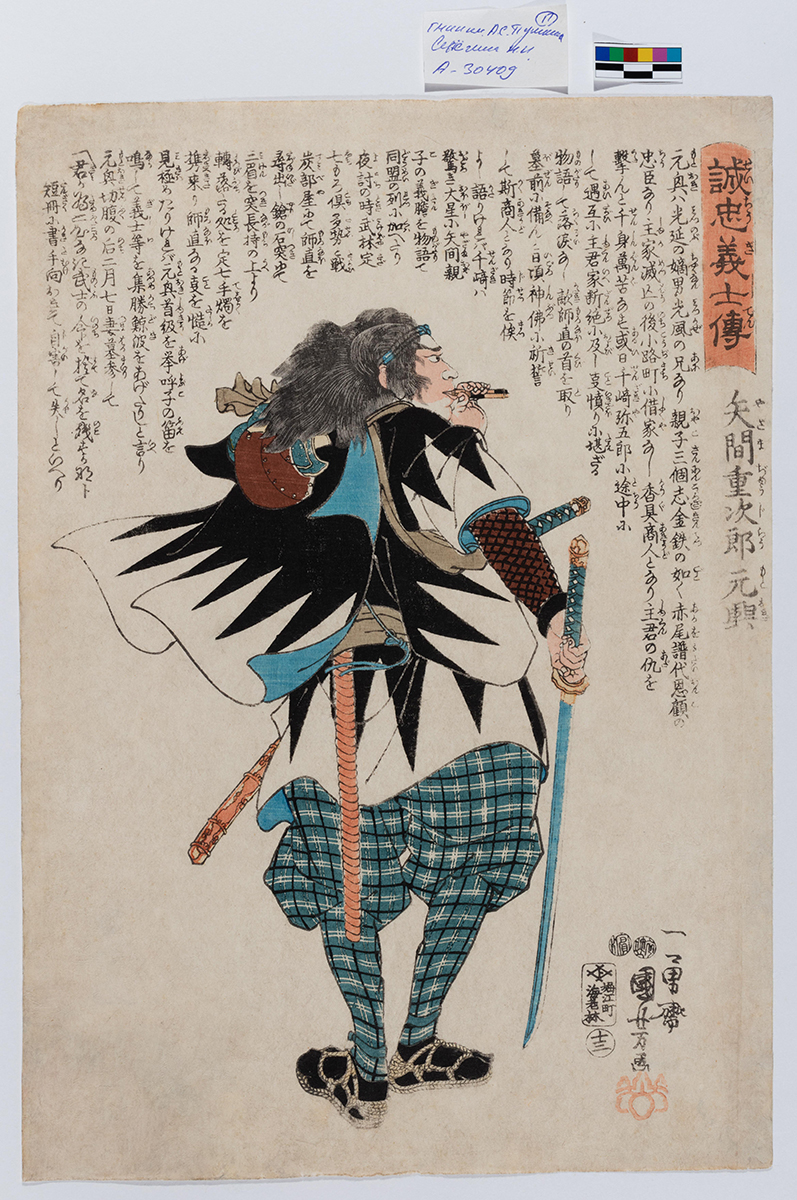 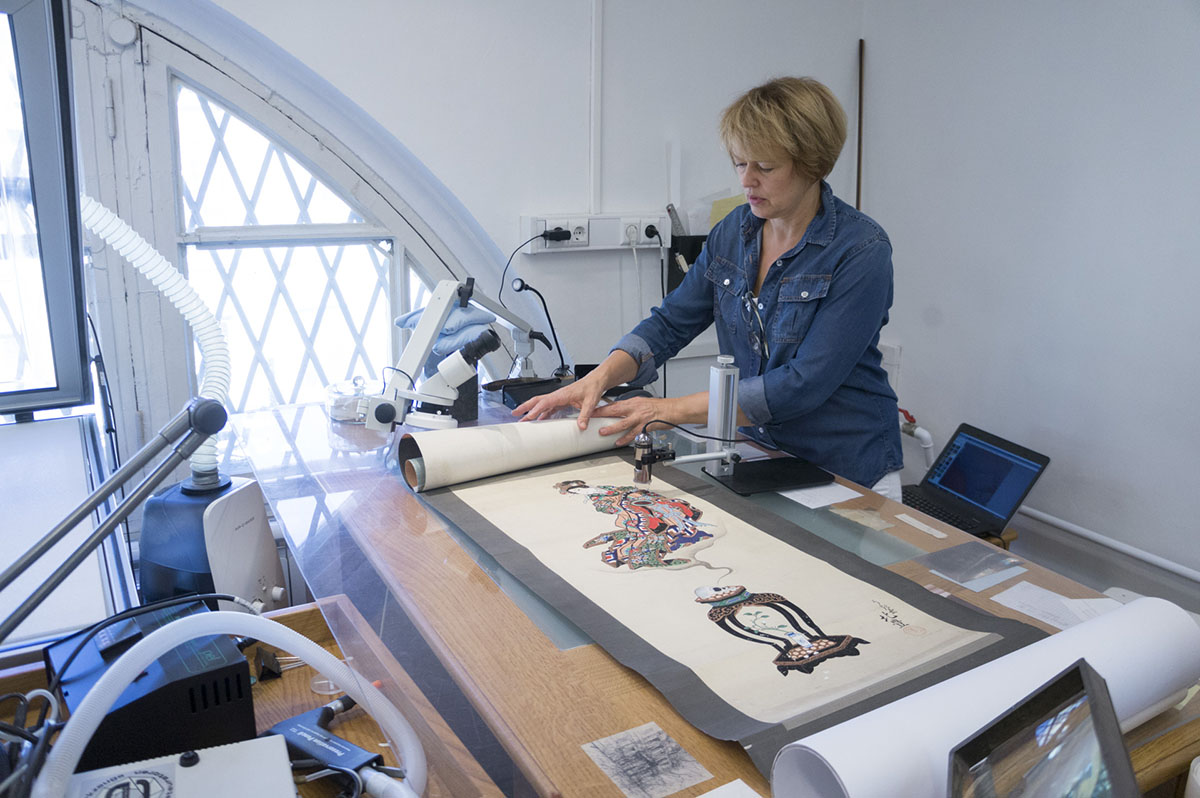 Marina Frolova, a Pushkin State Museum's conservator, at the workshop 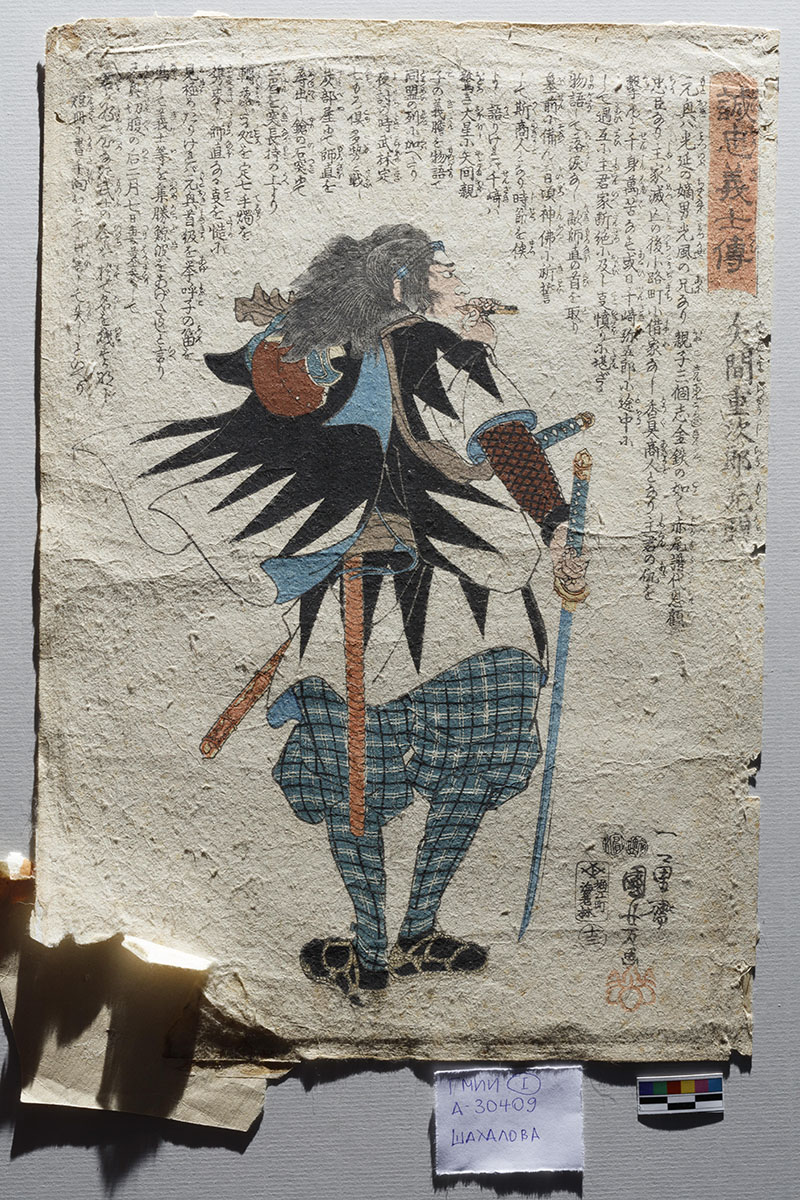 Hokuhō, "Dreams of a Scull" XIX 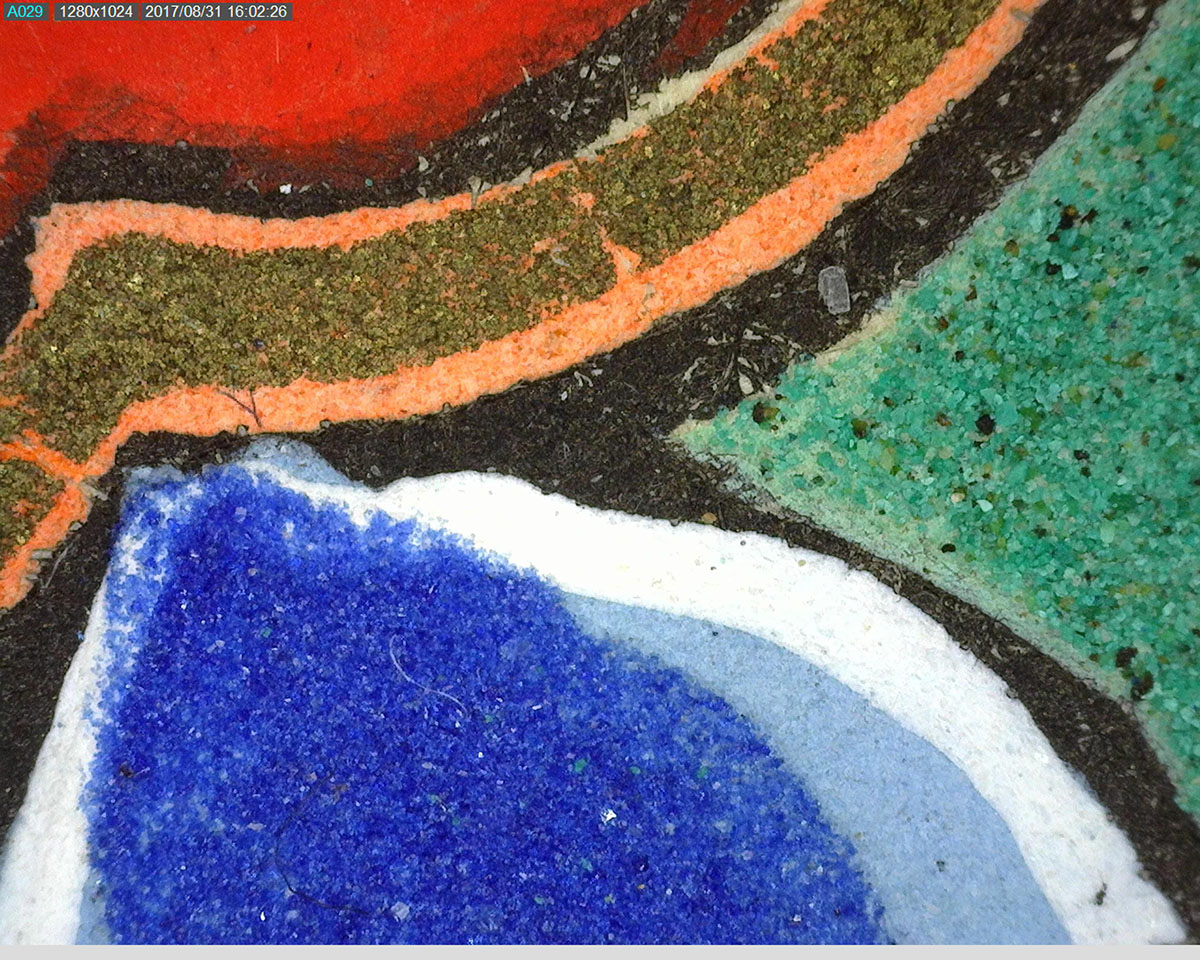 Hokuhō, "Dreams of a Scull", fragment under microscope 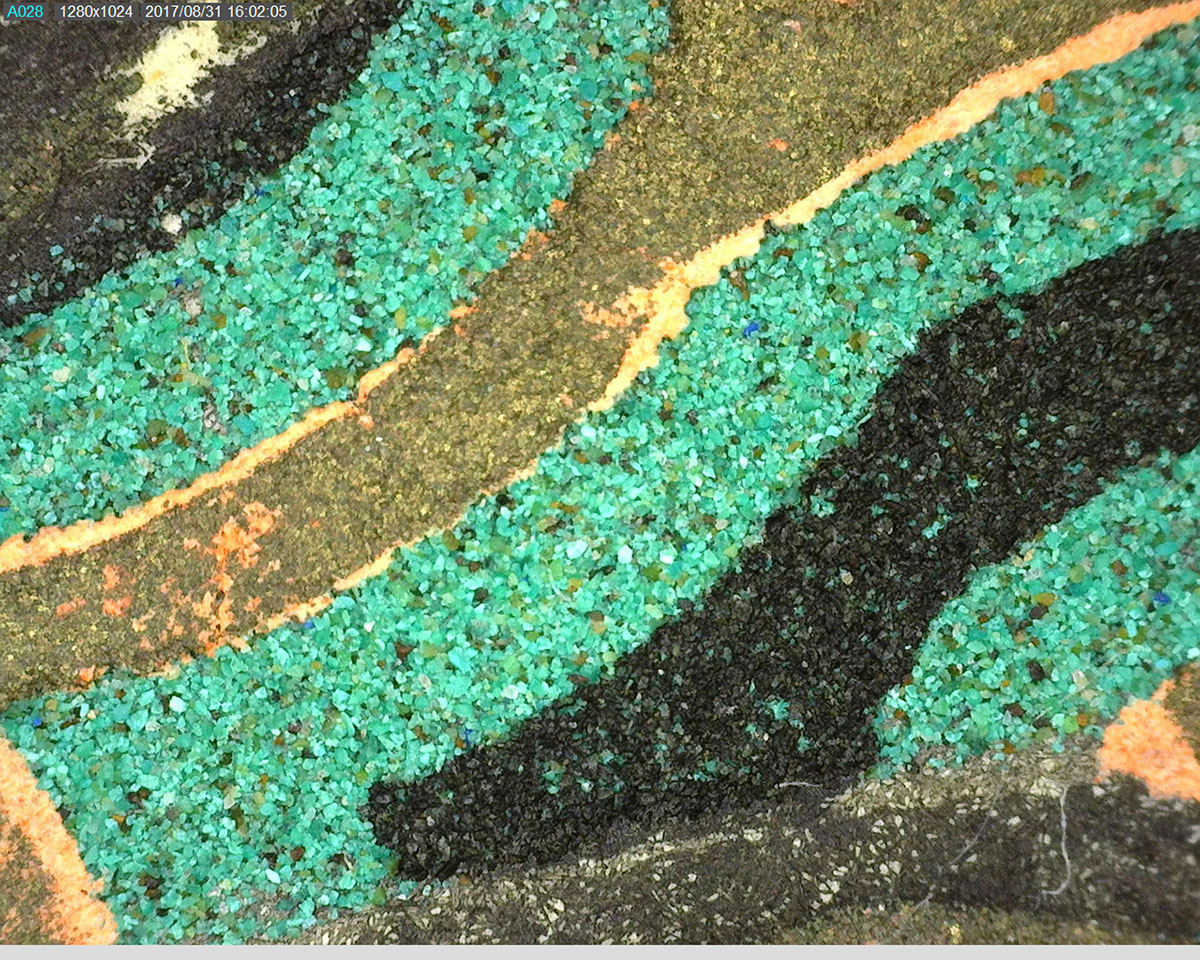 Hokuhō, "Dreams of a Scull", fragment under microscope

Unknown artist, "Lion in the Clouds" 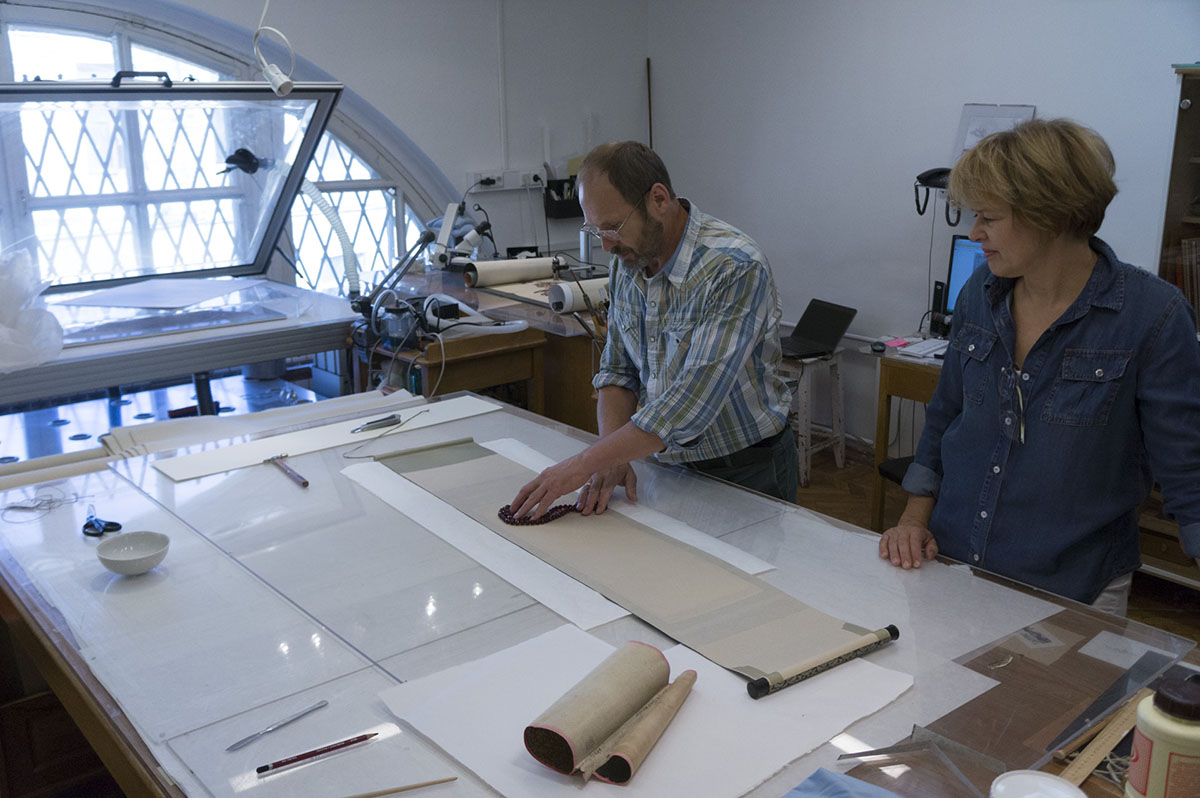 Art conserators MArina Frolova and Yuri Berezin at the workshop

The first large exhibition of a contemporary Japanese artist Takashi Murakami in Moscow Under the Radiation Falls has opened at Garage Museum of Contemporary Art. Among other works exhibited there, there are some that came from the Pushkin State Museum's collection.

The Pushkin State Museum's conservators prepared seventeen Japanese scrolls, seven block prints and a drawing. Preparations for exhibitions are an integral part of a museum conservator's job. The range and depth of works in this case can vary from a routine conservation to finding solutions to, at times, unexpected problems.

Two major schools of conservation joined in preparation for Takashi Murakami's exhibition: the western one, represented by the Pushkin State Museum's conservators, and the eastern one, represented by one of the main specialists in conservation of Far Eastern pictorial art Yuri Berezin of the State Museum of Oriental Art. The eastern approach to conservation of scrolls is characterized by making new outer frames using authentic technologies, rather than trying to restore original ones. In case of one of the Under the Radiation Falls exhibits Lion in the Clouds replacing the frame was a necessity, as its restoration appeared impossible.

Among other conservation works done during the eight month preparation period are mending tears and ruptures, paint layer consolidation, and retouching.

You can visit the exhibition covering several periods of Murakami's work in context of Japanese culture and see the results of conservators' work at Garage Museum of Contemporary Art from September 29th to Fabruary 4th.