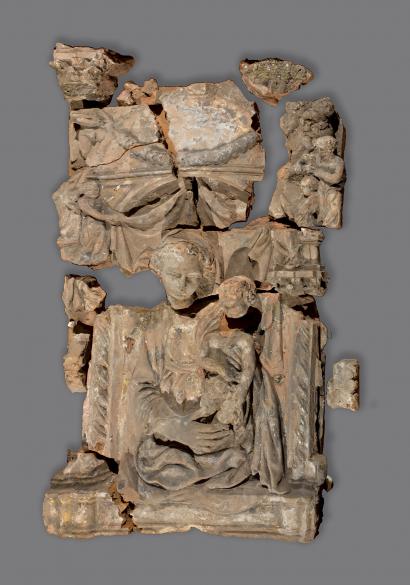 This large terracotta relief, which had retained its original painting until the fire in 1945, was purchased by the Berlin museums in Florence in 1888. The first catalogues mentioned it as a work by “Maestro della Cappella Pellegrini”. This name was used to denote Michele di Niccolò Dini (Michele da Firenze, 1385-ca.1455) before his actual name was established. But gradually researchers grew to believe the work could belong to a different, less skilled master coming from the same workshop of Lorenzo Ghiberti, where Michele da Firenze learned his craft. In 1922, Oscar Wolf pointing out at the style of the relief suggested that it should rather be attributed to the early works of Lorenzo Ghiberti himself. He also supposed the unusual decision to put an architectural detail on top of the relief could have been inspired by the dome of the Florence Cathedral seen by the sculptor. This point of view, however, has found no followers, while the work being physically unavailable after the war effectively meant that it was excluded from the academic research. Its closest analogue remains to be a relief in the Museo Nazionale del Bargello, Florence, which has retained its original painting and is attributed to Michele da Firenze.