Donatello and workshop (?), Flagellation of Christ 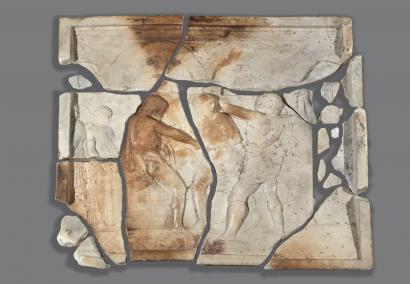 The relief Flagellation of Christ purchased by Wilhelm von Bode for the Berlin museums in the late 19th century with the mediation of the powerful Italian antiquarian Stefano Bardini, is among the most interesting and controversial masterpieces of the former Berlin collection. Being initially attributed to Michelangelo and originating from the collection of the famous Florentine family of Perruzzi, the relief was identified by Bode as an early work of Donatello that was created in the 1420s, close to The Feast of Herod for the baptistery in Siena. The relief was listed among the works of the sculptor up until 1958 when an authoritative monograph by H. W. Janson attributed it to an unknown sculptor of the 1480s. The new details obtained during the examination of the relief and the information from the Bardini archive which was unavailable for researchers for a long time, allowed to propose with a strong possibility that the author of the relief was, in fact, a talented sculptor, who lived in the 19th century and created a brilliant falsification that could not be identified by specialists for over a decade.