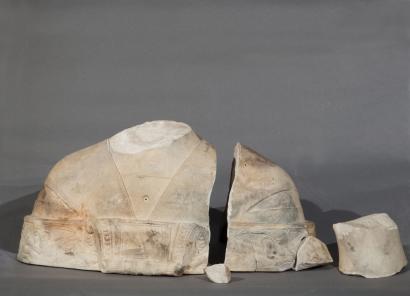 Wilhelm von Bode acquired the bust of a young woman for the Berlin Museums in Florence, in 1877. The deal to buy the bust from the old Florentine family of Strozzi was a notable event facilitated by Stefano Bardini.
From the moment it was found at the Strozzi family countryside residence, the bust was surrounded by myths and legends – It was seen as the very same portrait of Marietta Strozzi by Desiderio de Settignano described by Giorgio Vasari in "Lives...".
In 1888, Bode changed the attribution of the piece, as he thought it to belong to a Dalmatian sculptor Francesco Laurana who worked in Naples, whose female portraits ( in Vienna, Palermo, Florence and New York) are very similar to this one.
Very popular at the time, the Berlin bust is known for its many copies and reproductions produced even after it was damaged in 1945.
Today, the bust is split into two pieces between the museum collections in Moscow and Berlin, yet its attribution still is as contradictory as before. Research by Chrissa Damianaki published in 2000 cast doubt on the authenticity of this and several other busts attributed to Francesco Laurana. That point of view supported by some leading museum specialists (Anthony Radcliffe, Volker Crane), was refused by other well-known art historians (John Pope-Hennessy, Hanno-Walter Kruft, Francesco Calti) and still is not generally accepted.